"You may not put it in your eye, but it meets the guidance". ~ Marian Macsai-Kaplan, M.D., Ophthalmologist and FDA Advisor

"When you start talking about intraocular procedures you are now adding a whole new layer of risks." ~ Dr. Richard Duffey. Source

"However, not everyone is a fan of phakic lenses, and some foresee problems down the road. A surgeon from Utah dislikes them as an option, saying, “The rate of debilitating glare and cataract formation are way under-reported. They all eventually have to be removed if the patient lives long enough and forms cataracts.” Source: Walter Bethke. LASIK: Thin Flaps, Thin Volumes. Review of Ophthalmology. Feb 2015.

"Anterior chamber phakic IOLs, which are fixated to the iris, can induce corneal endothelial cell loss, and they require a large incision for implantation. Posterior chamber phakic IOLs, which are placed behind the iris but in front of the crystalline lens, can induce cataracts in as many as 40% of patients within 5 years, according to a recent Swiss study." Source: Uday Devgan, MD. Options abound in refractive surgery spectrum. Ocular Surgery News U.S. Edition, April 25, 2016 (Link)

If you suffered complications after ICL surgery, we invite you to join the discussion on FaceBook

IMPORTANT: If you experienced problems related to implantable contact lenses, the FDA wants to hear from you. File a MedWatch report with the FDA online. Alternatively, you may call FDA at 1-800-FDA-1088 to report by telephone, or download a copy of the paper form and either fax it to 1-800-FDA-0178 or mail it using the postage-paid addressed form. Read implantable lens injury reports filed with the FDA (enter product code MTA, select a date range, and click search).

So, what's this web page doing on a site about LASIK complications? Good question! We're often asked about alternatives to LASIK. Many eye surgeons have begun offering implantable lenses to their patients who are afraid of LASIK or have been found to be an unsuitable candidate for LASIK. But are they safer? Read on to learn why we don't recommend having these dangerous lenses implanted inside your eyes.

We enjoy hearing from our readers. Tell us about your experience with implantable lenses. Let us know if you found this web page helpful or if you have a suggestion on how we can improve it. Use the contact form on the menu bar above to contact us.

From the FDA website: Phakic intraocular lenses, or phakic lenses, are lenses made of plastic or silicone that are implanted into the eye permanently to reduce a person's need for glasses or contact lenses. Phakic refers to the fact that the lens is implanted into the eye without removing the eye's natural lens. During phakic lens implantation surgery, a small incision is made in the front of the eye. The phakic lens is inserted through the incision and placed just in front of or just behind the iris.

The Visian ICL is a posterior chamber collamer lens that was approved by the FDA in 2005. It requires patients to undergo peripheral iridotomy (Yag iridotomy), which is a hole in the iris made with a Yag laser. This is necessary to ensure that fluid flows properly from the back chamber to the front chamber of the eye to prevent a buildup of pressure within the eye after surgery. The lens comes in four sizes, which may present a challenge for the surgeon in selecting the appropriate lens for the patient's eye. Implanting the wrong size may lead to serious complications. Read the Visian Patient Information Booklet

Update 8/16/2014: We read that the latest design of the Visian ICL has a central hole which eliminates the need for iridectomy. We are uncertain if the new design is currently on the market.

The Verisyse lens received FDA-approval in 2004. It is marketed internationally as the Artisan lens by Ophtec and distributed in the U. S. by AMO under the name Verisyse. The Verisyse/Artisan lens is implanted in the anterior chamber of the eye behind the cornea and attached to the front of the iris. Risks include endothelial cell loss, pupil distortion and iris atrophy among others (see below). Implantation of the lens requires a relatively large incision and stitches. Read the Verisyse/Artisan Patient Information Booklet

There have been countless FDA-approved drugs and medical devices which were later recalled or withdrawn from the market after serious problems, even deaths, were reported. Moreover, in 2008 a group of FDA scientists accused agency officials of approving unsafe medical devices to appease industry. Read story

Industry pressure was key in FDA's approval of LASIK, according to former FDA official turned whistleblower Morris Waxler, PhD. As chief scientist, Waxler oversaw early clinical trials review for FDA-approval of LASIK. He now asserts that the approval was a mistake. Read story.

Corneal endothelial cell loss, which may lead to need for corneal transplant. Risk may be greater with an anterior chamber lens.

• From page 7 of the Verisyse/Artisan Patient Information Booklet: (content reorganized for clarity).

"The endothelium is a layer of cells which lines the undersurface of the cornea, and it regulates corneal water content. The endothelium works as a pump, removing excess water as it is absorbed into the stroma [middle portion of the cornea], the surface behind the epithelium. If the water content isn't regulated, the stroma could become saturated, resulting in a hazy and opaque appearance, which would reduce vision.

"Based on the data obtained from the clinical study of the ARTISAN® Phakic IOL, it is impossible to predict the effect that this IOL will have on the corneal endothelium."

• From pages 11 and 13-14 of the Visian Patient Information Booklet:

Complications After 1st Week: loss of cells from the back surface of the cornea responsible for the cornea remaining clear (endothelial cell loss, 8.9% at 3 years).

WARNINGS: The long-term effects on the corneal endothelium have not been established. You should be aware of potential risk of corneal edema (swelling) possibly requiring corneal transplantation. Periodic checks of your endothelium are recommended to monitor the long-term health of the cornea.

• Ocular Surgery News U.S. Edition, November 25, 2010: "The Air Force has not begun using phakic IOLs in any of our men and women in uniform, and we are waiting for additional long-term safety data regarding endothelial cell loss before we will begin using the lenses in our personnel". – Charles Reilly, MD, Lt. Col, USAF. Link to source

• This 2011 literature review found that cataract was the most common complication of posterior chamber intraocular lenses, reported at a rate of 5.2% of eyes implanted. Of those, 43.4% were reported within 1 year, 15.4% between 1 and 3 years, and 35.3% three or more years after after ICL implantation. Cataract surgery was carried out in 27.9% of eyes with induced cataracts.

• "But ocular trauma can cause the PIOL to shift, become dislodged, and even come into contact with the crystalline lens and induce a cataract. The most common traumas that Dr. Devgan has seen in these patients are due to airbag injuries during car accidents." Daly, Rich. "Long-term strategy for phakic IOLs." EyeWorld. March, 2014. Link to article

• Early acute intraocular pressure increase is reported frequently after phakic IOL implantation. Pupillary block glaucoma can occur due to occlusion of aqueous flow between the lens and the iris. This is a dangerous situation which may lead to permanent vision loss if not detected and remedied immediately. In this small study, pupillary block glaucoma occurred in 5.8% eyes within the first postoperative day.

• A retrospective study of Martínez-Castillo and colleagues (2005) with follow-up of 64.3 ± 10.35 months shows an incidence of retinal detachment of 2.7%, occuring from 1 to 70 months after implantation of posterior chamber implantable lenses. Link to abstract

An article published in the January 2015 issue of the Journal of Refractive Surgery reports causes of explantation of phakic intraocular lenses. See chart from article below (click to enlarge). 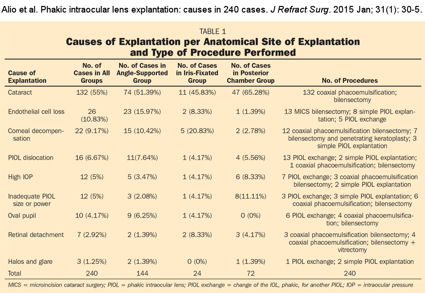 What about large pupils and implantable lenses?

How large is too large for ICL surgery?

Generally speaking, if your dark-adapted pupil diameter exceeds the lens optic diameter, you're not a good candidate.

The Verisyse lens is available in 5 mm and 6 mm optic diameters, according to the company's website.

You're going to have to ask some probing questions of your eye surgeon to determine if your pupil size makes you a poor candidate. Be sure to have your pupils measured in the dark after a period of dark adaptation, and repeat this measurement on a different day. 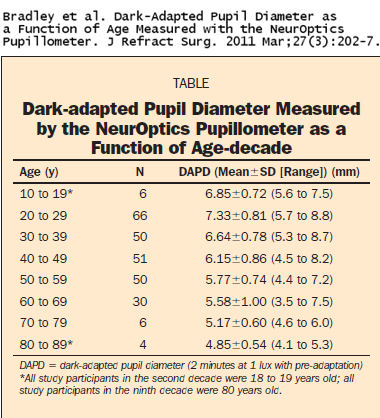 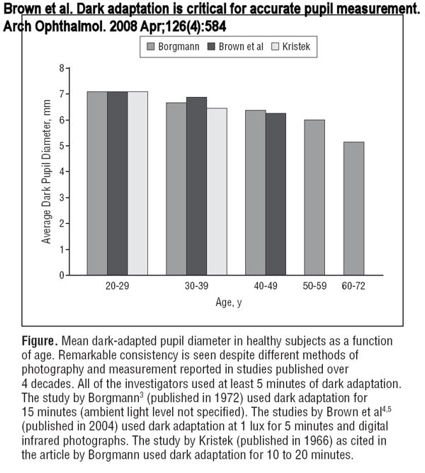 Based on these findings, a large percentage of patients should be disqualified for implantable lenses.

Had STAAR/Visian ICL implanted August 30 and October 9, 2012. Prior to surgery eyes were -9.75 and -10.25 diopters w/ astigmatism but eyes could accommodate. After surgery vision was 20/30 right and 20/50 left, but lost ability to accommodate, necessitating bifocals. In October 2013 noticed slight blurring of both eyes. In December 2013 original surgeon diagnosed cataracts both eyes. Right eye vision deteriorated significantly since then; surgery to extract ICL and cataract from right eye scheduled for November 13, 2014 with new surgeon. No risk of cataract discussed prior to surgery; STAAR/Visian materials state risk of cataracts is less than 1 percent.

Disclaimer: The information contained on this web site is presented for the purpose of warning people about complications of LASIK, implantable lenses, and other forms of refractive surgery prior to surgery. Patients experiencing problems should seek the advice of a physician.