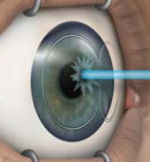 Celebrities - LASIK complications can happen to anybody.

Bilateral LASIK - Having surgery on both eyes at the same time doubles the risk!

IntraLase IntraLASIK iLASIK femtosecond blade-free all-laser LASIK: Problems and Recall - Latest technology in LASIK promoted as "better" and "safer". See what the LASIK industry is not telling you about all-laser LASIK.

Will My Brain Adapt? - As bizarre as it sounds, the LASIK industry actually counts on the fact that LASIK patients may forget how crisp and clear their vision was before LASIK.

LVI / LASIK Vision Institute - Get the scoop on this LASIK mill that runs patients through like cattle.

Comanagement - Your vision may be for sale without your knowledge!

Maculopathy - LASIK can wreck your vision in a number of ways; this is just one...

No Experience Necessary - Want to be a LASIK surgeon? No experience necessary!

Cool Laser - So why does the stench of burning flesh fill the laser suite?

WSJ: "Maloney Didn't Like Sick People" - A look inside the mind of a prominent LASIK surgeon.

5/7/2014: Ads trivializing laser eye surgery under scrutiny in Ireland. Read about it at Limerick Leader.

2/14/2014: LASIK mill, LasikPlus, bought out by cosmetic dermatology company. Read article In 2012, LasikPlus was slapped with an FDA warning letter for failure to report serious injuries.