Some of the pieces below were written by dissatisfied LASIK patients to help them cope. Patients with complications eventually develop considerable expertise in reading between the lines and seeing through LASIK marketing hype. For this reason, some of the allusions below will be obscure to those who have not yet discovered the truth about refractive surgery. 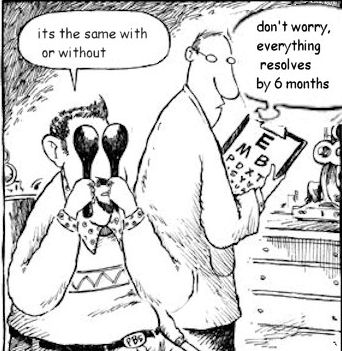 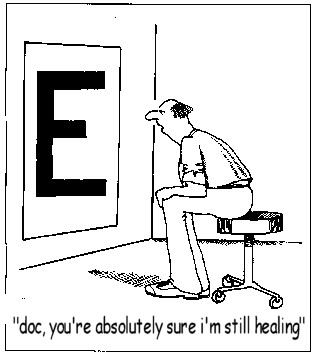 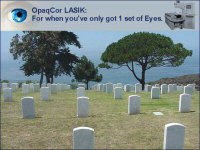 Blinded By The Light Laser Center (BBTLLC) of Louisiana is pleased to announce the arrival of the latest generation in laser correction. Blinded By The Light ushers in a new era in refractive surgery with its first-of-a-kind mobile service. Prospective patients who are fearful of the risk of driving to and from a LASIK clinic will soon be able to have LASIK surgery performed in the comfort of their own driveway....

Dr. Smallhorn, US Naval Base, Guantanamo.

ABSTRACT: 347 Al Qaeda detainees at the US Naval Base in Guantanamo, Cuba, received OpaqCor(tm), a new refractive surgery technique devised by Dr. Mark OvZorro, of Blinded By The Light Laser Center (BBTLLC) of Louisiana. Recently approved by the FDA as safe and effective, OpaqCor is designed to produce a perfectly opaque cornea, thereby completely eliminating wavefront error. All surgeries were performed by Dr. Small Horn, US Naval surgeon. Pupil size was recorded under standardized conditions: Subjects were required to stare directly into the sun. RESULTS: Of 694 eyes, all globes were successfully ruptured. 501 eyes immediately developed ectasia, and were pronounced a success. Among subjects having large pupils (n=2), opacification was complete at 3 months, 6 months, and 1 year, with no aberrations reported.

Princess Leia Tries to Get Help for Her LASIK Complications

What happens when Princess Leia has LASIK with surgeon Darth Laser? Find out as Leia, the Rebellion's most perfect candidate, tries to find out exactly what in hell is wrong with her eyes... Seems that even in the 24th century, some things never change...

A Day in the Life of a Lasik Surgeon

There goes the alarm! Long day ahead, so I'll just grab a bagel on my way out the door. What do I have this morning? At least 8 post-ops. Thank goodness for co-management, or it would be 40 and I wouldn't have time to make any money blasting corneas. Oh, I need to have Cindy call the keratome rep and tell him it's sticking! Cut a short flap yesterday, dammit. I'll probably get sued. Why oh why do I still do lasik on attorneys???? Well, lemme call Mike. "Hey Mike, my stocks are down again, thanks to that stinkin' newspaper article on lasik complications. I never hated the syndication of articles like I do these days. I'm getting calls from all over the country about this one. Yeah, just sell it all before they drop even further. I don't see any good news ahead for this industry. Thanks, buddy. Later."

"Good evening ladies and gentlemen. On the day of your surgery, I will first stretch your eye open with a metal device that has the potential for causing nerve and goblet cell damage. Your goblet cells make proteins that keep your eyes lubricated. Ladies, remember how you were always told to be very gentle with the tissue around your eyes? Forget that, I will stretch the daylights out of it. You may have a sagging lid or eyes that don't close all the way when I'm done." Then I'll apply a huge amount of suction to pull up floaters and potentially damage your retina and optic nerve!

During the evening of Halloween, there were many cars which traveled through the observed neighborhood. While many cars observed the 25 MPH speed limits and many were observed traveling under the posted speed limit, several cars were speeding down this residential neighborhood's poorly lit streets, with one traveling at 50 MPH.

Trick-or-treating children were observed in facial masks which many times appeared to obstruct their vision and they were many times seen not paying attention to their surroundings. In spite of this, no one was killed or injured by a motor vehicle during our study.